Screened at the Middle East Centre (MEC), St Antony’s College, on February 24, 2022,  followed by a discussion between the director, Dr Michael Willis, and Dr Raphaël Lefèvre 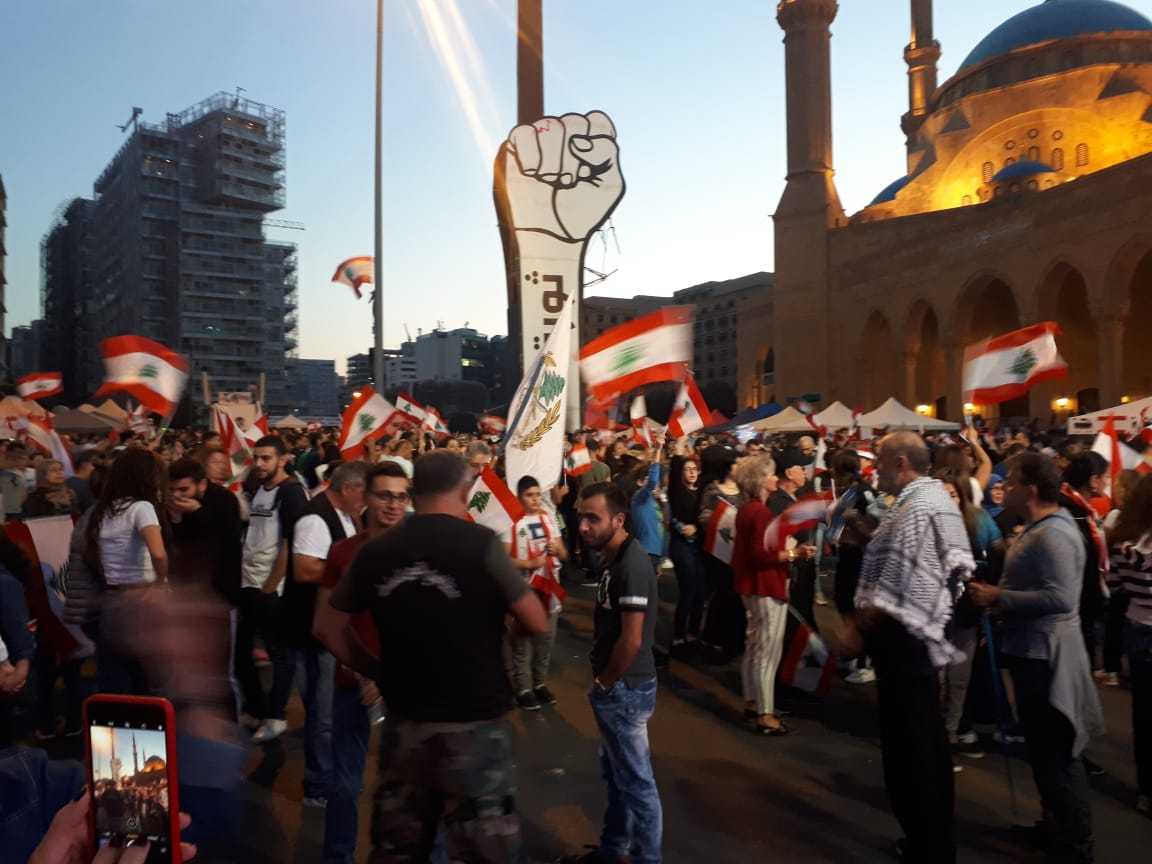 This striking and emotionally impactful new documentary by the award-winning Polish journalist and film director Krzysztof Dzięciołowski is urgent viewing for all those who still need to improve their knowledge of this fascinating country and its people– beyond just the headlines of bombs, blasts and demonstrations. Its presentation as part of the Middle East Centre Seminar series provided an invaluable opportunity to explore the themes of Lebanon’s recent history even further in a lively and varied discussion between MEC Director Dr Michael Willis, Levant expert Dr Raphaël Lefèvre, the film’s director, and an engaged audience.

The film, originally made for Polish television and screened there in October of last year, begins with the story of the devastating explosion of 4th of August 2020 told through the eyes of the ordinary Lebanese people who were affected by it in varying ways. In all likelihood, viewers would probably identify this as the most moving aspect of the 52-minute run time. The experiences of people from Beirut to the Bekaa are told in their own words and gradually woven together apparently organically through the director’s selection of interviewees whose lives coalesced on that day and in its aftermath. The story of parents Abou Jawde and Mortaja Haidar and their devotion in travelling to visit their premature triplets in a Beirut Hospital was given a particular focus in this part and was effective in binding the viewer emotionally in their fear of what could happen next. The subsequent introduction of nurse Pamela Zeinoun’s narrative of that day provided almost unbearable tension to the film, as she rushed from hospital to hospital carrying the babies after the blast destroyed much of the neonatal facility where they were being cared for. Pamela’s eventual success in her task, and the triplet’s subsequent reunion with their parents, effected an almost audible sigh of relief among the gripped audience while also highlighting the extraordinary actions Beirutis performed on that day in the face of overwhelming shock and adversity.

From there, the film looks back at the roots of Lebanon’s modern political constitution and current crisis: the 1975-1990 civil war, its settlement in the Ta’if power sharing agreement between the various sectarian elites, and the protests organised since October 2019. At this point, it must be said that the story loses much of its urgency and poignance. The voices of ordinary Lebanese are replaced with detached voiceovers, authoritative historians espousing theories of Lebanon’s primordial confessional feuding, and stereotyped, mid-twentieth century newsreel footage advertising the sectarian “co-existence” and metropolitanism of the so-called “Paris of the Orient.” The discussion on the postwar period, by the narrator and the interviewees selected, also focuses exclusively on the role of Hezbollah in instituting the corrupt and violent contemporary status-quo, neglecting the role of other former militia leaders in instituting an electoral system based around sectarian affiliation. Furthermore, the assumption that the explosives stored at the port of Beirut were Hezbollah armaments destined for Syria is accentuated above the wider mismanagement involved in catalysing the explosion. Therefore, Hezbollah and its allies in Syria and Iran are, again, the only parties identified by name in causing this catastrophe.

The return of focus to the recent experiences of the people interviewed since the 2019 protests, however, restores some of the film’s emotional impact and highlights the reason for the choice of “Explosion of Anger” for the subtitle. Rather than lingering on the sadness of Lebanon’s failure to build an equitable postwar state, this shift towards the demands of Lebanese since 2019 accentuates their agency and defiant outrage to the elites’ selfish mismanagement pre- and post-explosion. Also highlighted is the rejection by many in the current generation of the sectarian divisions in Lebanon and their success in forging, through protest, a cross- or non-sectarian civil society. While the film correctly points out the limiting effect the COVID pandemic and subsequent economic crisis have had on people’s ability and willingness to organise against the system, it is careful to show that Lebanese have, of course, not forgotten about their demands. In particular, William Noun’s continuing struggle for accountability over the death of his brother Joe, a firefighter killed in the blast, demonstrates the survival of the non-sectarian opposition to the pernicious mismanagement and clientelism of the elites of all religious groups. Lebanese artist Hayat Nazer’s sculpture built from the blast wreckage and depicting a woman holding aloft the national flag then stands at the end of the film as a powerful statement to the pride people have in their country and of the hopeful future which could still be built from the wreckage.

Once the audience and speakers managed to gather their thoughts from amongst the varied emotional responses that had been triggered, the film was followed by a productive discussion between the viewers, the director, and Dr Lefèvre. In particular, Dr Lefèvre’s decision to expand on the film’s mention of the birth of a strong civil society in Lebanon was interesting in illuminating the the roots of this cross-sectarian space in earlier movements such as 2015’s Beirut Madinati (“Beirut, my city”) echoing the work of director Dzięciołowski’s fellow Reuters Institute researcher Habib Battah on pre-2019 citizen-led collectives in Lebanon. More so than the documentary, Dr Lefèvre was also hopeful for the future of Lebanon and real political and social change after May’s upcoming general elections in which 26% of voters plan to opt for civil society groups rather than sectarian parties, according to a recent poll he cited. Though he raised fears that disagreement within the nonsectarian groups over the issue of Hezbollah’s arms could undermine the movement while the established political classes have long been adept at resisting change in the past, he expected that the advanced age of many of the former militia leaders, coupled with their inability to secure votes through patronage any longer as a result of the financial crisis, will limit their effectiveness in stymieing reform in the future.

When asked about whether he interviewed any supporters of Hezbollah for the film, director Krzysztof Dzięciołowski stated that he had but had also been forced to excise these clips from the final cut due to the strict time constraints for the television premiere. Though this is completely understandable, the director’s stated aim in the discussion was to hear from “different walks of life,” while the length of time spent on Hezbollah’s role in creating the current crises was considerable. Instead, the inclusion of the roles just some of the other internal and foreign actors, such as Israel as one audience member pointed out, have played would have created a more balanced picture. Dzięciołowski concluded, however, by reminding the viewers that this was the first film made in Poland since the end of the Lebanese Civil War in 1990 and so had to be a short and general “introduction to Lebanon for Poland.” Despite its drawbacks and biases, his film certainly meets and, in fact, exceeds this aim in allowing the voices of many ordinary Lebanese to speak for themselves and demonstrate that, while not so prevalent in the news, their anger remains undimmed and the need, and hope, for change still pivotal for the future of the country.

Avid podcast-listener? There are two Oxford-based avenues to learn more about the Middle East:

Almanac is a student-run initiative at the University of Oxford. Every two weeks, a number of students sit down for an in-depth discussion about the region which has made history for thousands of years and continues to make headlines today. https://podcasts.apple.com/gb/podcast/almanac-the-oxford-middle-east-podcast/id1531062310